Vincennes University great and NBA Hall of Famer Bob McAdoo is truly a Trailblazer — the NJCAA is celebrating his outstanding contributions and accomplishments with a special honor. Probably regarded as the best VU player ever, McAdoo was inducted into the inaugural 2021 NJCAA Foundation Hall of Fame class on Thursday.
3 months ago – via Special to the Courier & Press @ Evansville Courier & Press 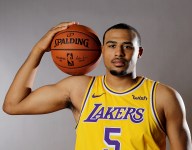 Want to tip us on a story? E-mail rumors@hoopshype.com or DM @hoopshype.

Arash Markazi: According to Stathead Basketball and the Lakers: “Andre Drummond finished tonight’s game with 20 points and 11 rebounds, joining Bob McAdoo as the only Lakers players to log a 20-point, 10-rebound game in 22 minutes or less.”
5 months ago – via Twitter ArashMarkazi

Basketball-Reference: Yesterday was Julius Randle’s second game this season with 30+ points, 12+ rebounds, and 6+ assists. He’s the first Knick since Bob McAdoo in 1977-78 to do that twice in a season stathead.com/tiny/cbwTU pic.twitter.com/a89nTfc5KG
6 months ago – via Twitter bball_ref

Mirjam Swanson: From the Clips: This is Kawhi Leonard’s seventh game this postseason with at least 30 points scored which ties Bob McAdoo for the most such games in a single postseason in franchise history. “
1 year ago – via Twitter MirjamSwanson

share
tweet
send
sms
email
Murray and Mitchell took the record away from Jerry West and John Havlicek, who, in fairness, had their own unbelievable shootout with slightly higher stakes at hand, in the 1969 Finals. The two Hall-of-Fame ball-handlers combined for 463 points in that series, 12 fewer than what Murray and Mitchell just put up. The other highest-scoring playoff series duos all likewise took place in the 1960s and ’70s – Bob McAdoo and Elvin Hayes in the 1975 conference semifinals (461 points), Elgin Baylor and Bob Pettit in the 1961 division finals (461 points) and Kareem Abdul-Jabbar and Rick Barry in the 1977 conference finals (450 points).
1 year ago – via Frank Urbina @ HoopsHype

Basketball-Reference: Luka Doncic isn’t the only 2nd year player having a big scoring season. Trae Young is averaging 28.7 PPG. In the last 50 years, the only players with more PPG in their first or second NBA season than Doncic or Young are Kareem, Bob McAdoo, and Shaq bkref.com/tiny/jzl7z pic.twitter.com/wUcJKNrfBi
2 years ago – via Twitter bball_ref