The rookie’s inclusion in the starting lineup was the result of forward Robert Horry spraining his left ankle during the team’s win over the Seattle SuperSonics. Coach Del Harris decided to move guard Eddie Jones to the three-spot, then put Bryant into Jones’ role at shooting guard. But even then, Harris had a contingency plan in case the moment proved too big for Bryant. “It’s a risk,” Harris told The County Sun during shootaround. “If it doesn’t work out, we’ll put Jerome Kersey in there. At this point, Jerome will be a backup, and we have to get him settled into that. And Byron Scott is a backup. Kobe knows when Robert’s back, he’ll go back (to coming off the bench).”
5 months ago – via Rhiannon Walker @ The Athletic

“He was always bringing up questions that had to make me think. … I was like, wait a minute, let me think about this for a second,” Scott said. “It wasn’t your everyday or normal questions that you normally expect from somebody that age. … He wanted to ask you certain things that he felt that could help him in the future. It wasn’t, ‘How was it like playing against Michael Jordan.’ Those are easy questions.” “He had difficult questions. ‘When you used to play against Isiah Thomas, why did you always try to guard him straight up instead of force him one way or another?’ I was like, ‘What? What are you watching, what you been looking at?’ But that was Kobe.”
1 year ago – via Los Angeles Times staff @ Los Angeles Times

Bryant reached back to his glory days and produced one last magical moment for all to see and enjoy — a 60-point masterpiece at the age of 37. The artist had painted one last memorable picture, leaving his audience enthralled by his work and Scott satisfied that he got Bryant to the end with the ability left to show his greatness one more time. “My first recollection of it was when we walked into the locker room, I was like, ‘All right, mission No. 1 was accomplished,’ and my mission that whole season was to get him to Game 82 and get him there relativity healthy as best as I could,” Scott recalled about that day five years ago. “I wanted him to play in that last game. So, I was like, OK, that’s accomplished. That’s mission No. 1.
1 year ago – via Broderick Turner @ Yahoo! Sports

share
tweet
send
sms
email
“I think he had damn near close to 50,” Scott said. “I was like, “Can you believe this s—? Can you believe this s—, man?’ So I’m in the huddle and I just tell everybody to ‘get the f— out of the way. Let him keep going.’” Before they left the huddle, Scott said he turned to Lakers assistant coach Paul Pressey and said, “Press, he’s exhausted.” “I go back and I kneel down, and before I even wrote a play down, I looked at Kobe, he looked at me, and he was just breathing heavily and I said, ‘KB, you got another seven minutes, seven and a half minutes left in that body of yours?’” Scott said. “[Kobe] said, ‘Absolutely.’ I punched him in the chest, and I was like, ‘All right. All right.’”
1 year ago – via Broderick Turner @ Yahoo! Sports 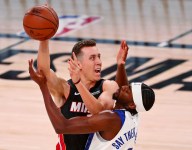 Tim Reynolds: Max Strus tonight: 21 points, 0 rebounds, 0 assists, 0 steals, 0 blocks, 0 turnovers. First such game in Heat history. The last time any player had such a game was Cuttino Mobley in 2007. The last time someone did it as Strus did, on nine shots (or less): Byron Scott in 1995.
1 year ago – via Twitter ByTimReynolds

share
tweet
send
sms
email
As Scott sees things — like Riley, he’s a former coach too — this Heat team that was the fifth seed in the Eastern Conference and wasn’t expected to reach the Finals is a team that embodies all that Riley is about. “He grew up tough,” Scott said by phone. “His dad was strict on him, demanding and hard on him. That’s how he’s lived his life. As he used to always tell me, ‘Hard work doesn’t guarantee you anything, but without it you’re not going to get nothing.’ And that was Pat Riley. Him and Erik [Spoelstra, the coach] built this Heat team in Pat’s image. They are a bunch of guys that is going to play hard every single night.”
2 years ago – via Broderick Turner @ Los Angeles Times