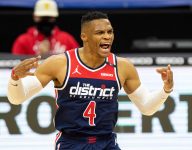 share
tweet
send
sms
email
One prospect in this year’s draft believed to be ready to make an instant impact is Cameron Johnson, who split his five years of college at Pittsburgh and North Carolina. Johnson, who averaged 16.9 points and 5.8 rebounds for the Tar Heels in 2018-19, is 23 years old, so some say he’s close to, if not already at, his ceiling. That’s not what the Moon, Pennsylvania native believes, though, citing his major progression this past year as to why he can ascend even more. “I feel like in these last couple months even I’ve gotten a lot better,” he said. “I did do a couple certain things very well in college. That’s kind of what I hung my hat on so now I’m expanding other parts of my game. I’ve had some bumps along the road over the past five years that I’ve had to overcome and I feel like each step I’ve gotten better and if you look at my college career, I feel like each year I’ve improved in some way or another and I will continue to do that.”
2 years ago – via NBA.com

North Carolina’s Nassir Little, Coby White, and Cameron Johnson all received NBA Combine Invites. The NBA Combine will take place over May 14-19 in Chicago, Ill.
3 years ago – via 247Sports