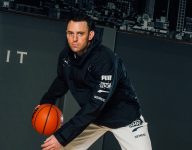 So what sort of player will the Rockets eventually get with Porter Jr? The Athletic spoke with Chris Brickley, professional basketball trainer and Porter Jr.’s personal trainer to get a clearer picture of the talent in Houston’s hands. […] Seeing him on television is one thing, but how was it being able to see his game up close? He has a very unique game. Chris Brickley: He does. He’s super talented and anyone that sees him play says the same thing. Even this summer, him and Melo were working out together and Melo was like: ‘Man, this kid’s really good’. He’s very athletic, he can shoot the ball very well, much improved since his college days. This summer he was shooting it at a very high percentage. He can handle the ball, very good defensively, very quick and athletic. He has all the tools that you need to be successful at the NBA level.
8 months ago – via Kelly Iko @ The Athletic

share
tweet
send
sms
email
There’s been a lot said about him in the media, as you know. You’ve spent a lot of time with him — how is he as a person? Chris Brickley: He’s a great person, he’s a great kid. When he would come into New York — most NBA guys would get a hotel — KP would just stay at my place. He would want my company, we would be up watching old Cavs games, so many games from his rookie season. He really is someone who loves the game of basketball. Not too many people talk about that, I see some players who talk about it, but not as much as KP. He really is a big student of the game. He watched a ton of NBA, college, high school. He’s a basketball junkie. As far as work and him being at Declared, any time I’ve ever worked with him — if I give him a time like 8 a.m or 8 p.m, he’s always been on time. I personally haven’t had any problems. It’s been a really good friendship and it is to this day.
8 months ago – via Kelly Iko @ The Athletic

share
tweet
send
sms
email
With him now being traded to Houston, how crucial will it be for him to be in a nurturing environment where everyone is on the same page and wants the best for him? Chris Brickley: I think that’s huge. When you’re a young player in the league, Kevin Porter’s really young — for example, Cole Anthony’s someone that I’ve worked with closely and I think he’s older than Kevin. When you’re that young, I could never imagine being 19, 20 years old in the NBA. I think having teammates that are willing to mentor you and pick up the phone, take you out to dinner. Showing that you care is huge with teams. I think some teams have that camaraderie and some teams don’t. With John Wall and Boogie, it seems like Houston has some vets that understand so I think it’s gonna be a great situation for him.
8 months ago – via Kelly Iko @ The Athletic

share
tweet
send
sms
email
Meeks worked out in Los Angeles at the Mamba Academy with several Brooklyn Nets players in November, including Kevin Durant, Kyrie Irving, James Harden, and DeAndre Jordan. The former Kentucky Wildcat also trained with Chris Brickley in New York during the fall. “They need to get me in Brooklyn,” Meeks told HoopsHype. “They need some shooting.”
8 months ago – via Michael Scotto @ HoopsHype