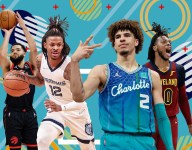 Ranking the likeliest players to make All-Star debuts this season 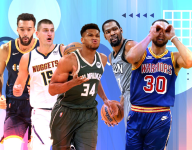 MVP Race: Who are the best players based on advanced analytics and impact metrics?

Chris Fedor: Along with the others (Darius Garland, Jaron Blossomgame and Kevin Porter Jr.), Dean Wade also will not play tonight for #Cavs. It’s a rest night for him.
3 years ago – via Twitter ChrisFedor

The private gymnasium belonging to Mr. Steve Jackson, owner and chairman of the popular 1980s and ’90s shoe company LA Gear, includes a full-length basketball court that is a replica of the floor at Staples Center. On one wall there are a bunch of old Lakers jerseys, Kobe Bryant’s among them. On the other, replica Lakers championship banners. And in between them, last weekend, Darius Garland made himself a top-five NBA Draft pick.
3 years ago – via The Athletic

share
tweet
send
sms
email
According to several people who were at Jackson’s gym that day, Garland didn’t miss a shot for five or six minutes. By the end of the display, new Cavs coach John Beilein couldn’t contain his excitement, his encouragement. He was vocal, cheering on Garland as shot after shot traveled to the bucket. Beilein, general manager Koby Altman and the huge contingent of Cavs deep thinkers there interviewed the 19-year-old after the workout, and the discussion was influenced by what they saw on the court. Five days later, the Cavs made Garland the fifth overall pick in the draft.
3 years ago – via The Athletic

share
tweet
send
sms
email
“He was shooting from back in Nashville and we were in California,” Beilein said Friday. “We saw him take 30-footers and flick them like it was nothing,” Altman said. “It really meant a lot to me when the whole staff came out, I know that they’re really interested,” Garland said. “I knew I had to come out and put on a show for them. “I was pretty deep out, I think.”
3 years ago – via The Athletic