Dick Vitale has been synonymous with college basketball on ESPN since the very beginning, and he’ll be sticking around a while longer. The gregarious color analyst has agreed to a new contract that carries him through the 2018-19 season, ESPN announced Thursday. The end of the deal coincides with Vitale’s 40th anniversary at the network he joined shortly after it went on the air in 1979.
6 years ago – via Sporting News

share
tweet
send
sms
email
Last season, when he spoke to For The Win, he cited the same reason for why he had no plans for retirement. It’s a point he reiterated again this week. “(This is) going to be my 36th year (on ESPN),” he said. “I told Dan Patrick earlier and I’m going to tell you: My goal is to be the first broadcaster in the history of broadcasting to work at a game when I’m 100 years old.
8 years ago – via For The Win

share
tweet
send
sms
email
Dick Vitale turns 75 in June. He has been around so long that sports viewers born in 1979, when he began at ESPN, are veering toward middle age. Yet Vitale, the former college and NBA coach, has no intention of getting off the thrill ride that has been his sportscasting career. And why should he? When he walks into arenas, the first sight of the familiar bald head sparks cries of “Awesome, Baby!” and “PTPer” from college kids who still devour his shtick the way their parents did at that age. Vitale absorbs the energy that comes his way as if it would allow him to turn back the clock. “I never have had a problem relating to young kids,” Vitale said. “I love being around them. They keep you young. If you didn’t tell me I was 74, and if I didn’t look in the mirror, I wouldn’t even know it.”
8 years ago – via USA Today Sports 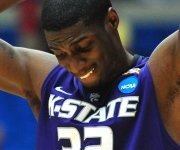