“I don’t know of anybody who ever set a meaner screen,” former shooting guard Doug Collins of the rival Philadelphia 76ers once said of him. Mr. Unseld, who died June 2 at 74, was the most important figure in the history of the franchise that morphed from the Baltimore Bullets to the Washington Bullets to the Washington Wizards. The cause was complications from pneumonia, the team announced. No other details were immediately available.
6 months ago – via Dave Sheinin @ Washington Post 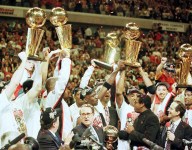 Who got the most air time in the Michael Jordan documentary?

It’s nonsense, of course. Krause was one of the keenest basketball minds of his generation, an ex–baseball scout turned NBA general manager who inherited a team with Jordan and proceeded to build out a roster around him. It was Krause who pulled off one of the great drafts in league history, in 1987, when he acquired Scottie Pippen in a draft-day trade with Seattle and scooped up Horace Grant a few picks later. It was Krause who pulled Jackson from the basketball bushes, plucking Jackson out of the CBA in ’87 to work as an assistant to Doug Collins, elevating him to head coach two years later. And it was Krause who used a second-round pick in 1990 on Toni Kukoc, nabbing a playmaking, sweet-shooting European big man years before NBA teams started scouring the globe for them.
6 months ago – via Sports Illustrated

share
tweet
send
sms
email
Krause’s wheeling and dealing to acquire Pippen in a 1987 draft-day trade on the same night he selected Horace Grant — with an assist from then-coach Doug Collins — marked one of the most important nights in franchise history and set the stage for the first three-peat. In this excerpt, Krause wistfully wrote about the first time he saw Pippen play at the Portsmouth Invitational in Virginia, an annual predraft showcase: Love at first sight — pure scouting love. Sitting high in the stands away from the other teams’ scouts and general managers as the teams came out to warm up before the last game of the tournament’s first round, I looked at (Bulls scout) Billy (McKinney) and said, ‘That’s Pippen, isn’t it?’ I could tell by his long arms. And the rest of the body — the shoulders, the feet. Wow. I’m thinking, ‘If he can play, this could be something.’
7 months ago – via K.C. Johnson @ NBC Sports

share
tweet
send
sms
email
The Sixers were coached by Doug Collins at the time and it seemed that Chapu could have a good time there again, because Collins told him he was going to be an important part of the team. But he got injured just before the 2010 World Championship. Collins called Chapu when he was in Turkey ready for the tournament and said: “Give up and don’t play. If you don’t, we can pull you out from the tournament because your health is in danger.” It was the beginning of the end. “I told him that I was not going to do it because I thought I could play. I also knew my body and, although it was not at one hundred percent, it could reach 80%. I also told him that playing at the World Championship would let me be ready to play the season in Philadelphia,” said Nocioni in his authorized biography. Obviously, Philadelphia pulled him out of the World Championship.
7 months ago – via Basquet Plus

share
tweet
send
sms
email
“Doug Collins lied to my face. Because he told me that I was going to be like Jesus Christ for the Sixers. And that’s why they took me out of the World Championship. The one coach who lied to me the most was Collins. He promised me something that later it wasn’t true. Andre Iguodala and Evan Turner played in Philadelphia, and I started playing when Iguodala was injured. But when he came back, everything changed. Andre did not want me in the team, because I hit him in practice, pushed him, irritated him. He was complaining about it, and instead of having my back, Collins pulled me out of the rotation. Then he lied to me again just before the playoffs. One day he comes and says ‘I’m going to rest Iguodala for a few games. I’ll give you those games so you are ready for the playoffs. Because this is a big thing, this is not for kids. Be ready’. I played well in the final two games of the regular season, averaging 15 points, and we started the playoffs against LeBron’s Miami, I had 10 minutes and never played again.”
7 months ago – via Basquet Plus

share
tweet
send
sms
email
Michael Jordan did not like hearing the news that former Chicago Bulls general manager Jerry Krause was planning to fire coach Doug Collins and replace him with assistant Phil Jackson. “I wasn’t a Phil Jackson fan when he first came in,” Jordan said in episode four of “The Last Dance,” a 10-part series on Jordan and the Bulls. “He was coming in to take the ball out of my hands. Doug was putting the ball in my hands.”
7 months ago – via Mark Medina @ USA Today