Scott Agness: Duane Washington Jr. will not play today at summer league after being waived by the Pacers on Thursday.
7 months ago – via Twitter ScottAgness

share
tweet
send
sms
email
The Pacers currently have $26.4 million in cap space so they need to make some moves to generate the $30.9 million needed to sign Ayton to a maximum contract. According to Wojnarowski, the Pacers plan on doing that by waiving Duane Washington, who is non-guaranteed, and waiving-and-stretching Nik Stauskas, Juwan Morgan, and Malik Fitts. Washington’s contract is non-guaranteed, so waiving him opens up $1.6 million. Stauskas, Morgan, and Fitts, all of whom were brought over from Boston in the Malcolm Brogdon trade, had their guarantees increased to all but $86,988 of their full salary amounts. By stretching their cap hits over the next three seasons, the Pacers will have $31.9 million in cap space.
7 months ago – via Yossi Gozlan @ HoopsHype 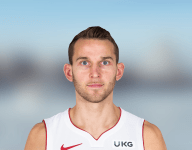 Adrian Wojnarowski: The Pacers are waiving guard Duane Washington and waiving and stretching the three players who arrived in the Boston trade for Malcolm Brogdon: Malik Fitts, Juwan Morgan and Nik Stauskas, sources tell ESPN. That’ll create the cap space to sign Ayton to the max offer sheet.
7 months ago – via Twitter wojespn

share
tweet
send
sms
email
Keith Smith: Just as a note: If the Suns choose to match the Pacers offer sheet for Deandre Ayton, the Pacers can’t then reverse the waivers of the players they let go. If you renounce free agents, you can reverse those renouncements if an offer sheet is matched. You can’t reverse waivers.
7 months ago – via Twitter KeithSmithNBA

share
tweet
send
sms
email
Bobby Marks: Indiana has to clear out $4.7M in cap space to reach $30.9M in salary. Several mechanisms to do that including waiving the non-guaranteed contract of Duane Washington and using the stretch provision on several players, including Malik Fitts.
7 months ago – via Twitter BobbyMarks42