The Utah Jazz announced today that the team has signed center Udoka Azubuike and forward Elijah Hughes.
10 months ago – via NBA.com

share
tweet
send
sms
email
Jeremy Woo: The Jazz are acquiring the No. 39 pick, Elijah Hughes, from the Pelicans, I’m told
10 months ago – via Twitter JeremyWoo 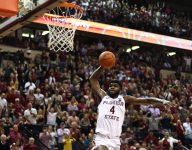 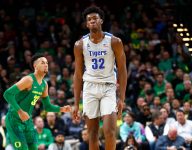 …Today I’m following suit by sharing what I’ve learned about Syracuse’s Elijah Hughes. Born in Poughkeepsie, New York and raised in Beacon, New York, Hughes had a strong family unit in the form of his parents, Wayne and Penny Hughes. When he was young, he was the kid who always had a basketball in his hand, seemingly having a natural predisposed affinity for the orange ball. He honed his craft growing up at Loopers Park, playing day in and day out until the frigid winter snow would no longer permit games outside. As a direct result, Hughes’ life-long goal has been to erect a community center in his hometown that would allow the local youth to play basketball indoors year-round.
12 months ago – via Babcock Hoops

share
tweet
send
sms
email
Hughes began his high school career at Beacon High School before transferring to Kennedy Catholic in Somers, New York. At Kennedy Catholic, Hughes starred on the court but had his fair share of struggles in the classroom. On the court as a junior, he helped lead his Kennedy squad to a 26-2 record and a runner-up finish in the prestigious New York-based Catholic High School Athletic Association (CHSAA). The CHSAA is a highly competitive league, rich in history, that produces high major talent in troves annually, and is home to powerhouses like Archbishop Molloy, Archbishop Stepinac, and Christ The King School. The CHSAA is perhaps the most historic high school basketball league in the country, a solid balance of rigorous academics and on-court competition. While at Kennedy, Hughes had his fair share of struggles in the classroom. During the summer going into his senior year, he had to attend summer school in July in order to maintain his eligibility. In the process of summer school, he was forced to miss his final grassroots circuit season. The final U-17 season can be the most pivotal for late-rising recruits, which is what he credits as being part of the reason he was so under-recruited. “If he would have played on the circuit, he would’ve been a top-50 player,” said Hughes’ former coach, Kelvin Jefferson.
12 months ago – via Babcock Hoops