Connelly was not given a slice of equity in the team in the same way that Flip Saunders was when he returned to the organization in 2013. But his contract does call for him to have the option to benefit financially should the value of the franchise go up over the years, sources told The Athletic.
1 month ago – via Jon Krawczynski @ The Athletic

Storyline: Timberwolves Front Office
share
tweet
send
sms
email
“My dad was out of coaching for the first time since 1977,” Ryan said. “We would go on some long runs. We did a lot of biking. He would call me up at the U and we would meet halfway for lunch. “Losing my dad six years ago, I cherish those extra few months of full family time. Those memories remind me that sitting out from coaching for a year isn’t a bad thing.”
2 months ago – via Patrick Reusse @ Minneapolis Star-Tribune

Kevin Love on fans not believing Ben Simmons about mental health issues: “It’s hard to argue feelings, first and foremost. I think a lot of people like to throw shade at a safe distance. I learned from the late, great Flip Saunders that everybody has a part to play, everybody gets to contribute a verse. I understand a scorned fan. I understand Philly fans — they’re a blue-collar type of place. You go there, it doesn’t matter who you are — even if you’re on their team and you don’t play well, they’re gonna let you know.
3 months ago – via Front Office Sports

share
tweet
send
sms
email
Saunders was known as a players’ coach, but there were times he had to let the kids have it as well. The most famous in Wolves lore came during a film session when Saunders was not happy with the effort level from his young team, particularly Wiggins. He called told them they needed to change the Timberwolves logo to an ice cream cone with the players’ faces on it. “I’ve never heard somebody get cussed out so gently before,” LaVine said with a laugh. “You guys are soft-serve ice cream. Dairy Queen.”
4 months ago – via Jon Krawczynski @ The Athletic

His No. 5 jersey will be retired in Boston later this season, a legacy-cementing achievement for one of the greatest power forwards to ever do it. Wolves fans won’t ever let him go. There was bad blood with Wolves owner Glen Taylor and tragedy when Flip Saunders passed away, but through all of the struggles that this franchise has endured, Garnett remains a shining beacon to their long-suffering fans. He could be demanding and biting behind the scenes, but that was the way for him to turn an unserious franchise into a team that commanded respect. And while so many players and coaches and executives came and went without paying this team, or this city, much mind, Garnett would never allow Minnesotans to feel inferior. “I left my spirit and my soul in there,” Garnett said then. “You can’t ever replace that. You feel me? That will always be, forever, as long as they have the Timberwolves in Minnesota.”
5 months ago – via Jon Krawczynski @ The Athletic

share
tweet
send
sms
email
Christopher Hine: Chris Finch at shootaround today made a point to honor the anniversary of the death of Flip Saunders. Said this is a tough day for the organization and while he never got to know Flip he admired the legacy of success he left.
8 months ago – via Twitter ChristopherHine 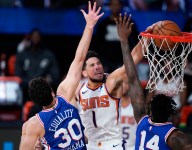