They had plenty of help. Dropping Dimes has an advisory board backed by big names in sports, media and basketball. Among them are Bob Costas, Reggie Miller, George McGinnis, Julius Erving, Myles Turner, Peter Vecsey and Bob Netolicky. “They all came together,” Tarter said. “It was kind of a labor of love.”
3 weeks ago – via Dana Hunsinger Benbow @ USA Today Sports

Walt Frazier Enterprises was a landmark. It had an office on Park Avenue. Frazier was its namesake and its face. He owned a third of it. Billy Cunningham, then a 76ers star, owned a third as well. Irwin Weiner, the actual agent in the midst, owned the other portion. Together, they represented some of the league’s top players, from Julius Erving to George McGinnis and George Gervin, at a time when there were few agents even around. “They set the tone for how things are operating now,” Mychal Thompson, one of its clients, said.
6 months ago – via Mike Vorkunov @ The Athletic

share
tweet
send
sms
email
If you’ve ever strolled through the IMS Pavillion on the main concourse of Bankers Life Fieldhouse, you’ve probably stopped to admire the mural that’s painted on the wall near the escalators. The mural pays homage to Pacers greats like Reggie Miller, George McGinnis, Mel Daniels, Roger Brown and more. But what most admirers of the piece may not know is that the artist, Indianapolis native Pamela Bliss, is currently in Los Angeles hoping a movie that she contributed to wins an Oscar at the Academy Awards.
4 years ago – via NBA.com

share
tweet
send
sms
email
Mark Montieth: George McGinnis was the only ABA or NBA league MVP not in Hall of Fame among eligible players. He shared honor with Julius Erving in 1975.
5 years ago – via Twitter MarkMontieth 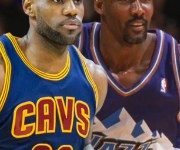