However, Turkoglu said that Turkey is still waiting for the camera footage they asked for and offered the Georgian federation to make it public. “If they think it’s a provocation, why don’t they show the footage to the public?” Turkoglu asked the media. “I’m offering you right now. If they think we’re provoking someone and they have the guts, why don’t they show the cameras and what happened in the locker room?”
3 weeks ago – via Edvinas Jablonskis @ BasketNews

share
tweet
send
sms
email
“Then we’ll see who’s lying and who’s not. Who’s provoking or not. Next time you see them, ask them this question, too. If you believe in yourself that much, why don’t you show the cameras to the whole world what happened? Then we can say whether we provoked someone or not. If you believe in yourself that much… If you have the guts, if you have balls, why don’t you show the footage? But if you don’t have it, you shouldn’t be talking about the situation,” Turkoglu continued.
3 weeks ago – via Edvinas Jablonskis @ BasketNews 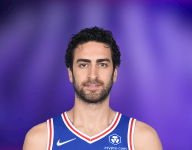 Furkan Korkmaz on incident vs. Georgia: 'It was like a street fight'

Meanwhile, Korkmaz narrated the infamous incident differently than Shengelia. “It was like a street fight. There was no talk or conversation. People just came at us and were trying to attack us. Of course, we reacted and tried to defend ourselves – exactly what we are going to do as men. I also think it’s a security problem. But I don’t know if it’s a security problem or if they just showed tolerance to their players. We understand that they’re at home, but this is unacceptable. What happens on the court is fine, but we should talk more about what happens off the court,” Korkmaz told the media.
3 weeks ago – via BasketNews

share
tweet
send
sms
email
“Losing 22 seconds is a scandal,” noted Ataman to reporters during practice Monday, “The last possession was ours so if we had 24 seconds to play, that might have changed the end result. We made our objection and protest. This is a clear mistake of rule. We objected even at that time in the game but they rejected us and distanced us from the table. This event affected the end result. We demanded the game to be replayed, or at least that last 4:30 minutes. We expect this to be the outcome. But FIBA is an outdated organization, we cannot find any solution to the problems.”
3 weeks ago – via EuroHoops.net

share
tweet
send
sms
email
However, his team actually withdrawing its participation from EuroBasket is not being considered. “No, we are not thinking about leaving the tournament. Of course, if we continue like this, then we can’t play basketball,” explained Ataman, “We have talked with other teams, and everyone complains about the situation. Everybody is complaining. I talked with the Montenegro organization, I talked with Sergio Scariolo. Everybody is complaining.”
3 weeks ago – via EuroHoops.net

Korkmaz said that Sanadze was provoking him, saying some bad words, which he couldn’t let slide. “You saw a little part of what happened on the court,” Korkmaz began his statement. “We got into each other face to face, and he started talking s*** to me. I’m not gonna let anyone talk s*** to my face.”
3 weeks ago – via Edvinas Jablonskis @ BasketNews