Yogi Ferrell and Jehyve Floyd are leaving the team. Both of them are not active on the Greek league roster, however there’s no limit on foreign players for the EuroLeague games. And in both cases, so far they have a very limited role. That’s why Ferrell himself asked from the team to be released in order to find elsewhere more minutes and a different role.
2 weeks ago – via EuroHoops.net

Orazio Cauchi: Olympiacos officially announced the signing of American big man Quincy Acy until the end of the season.
1 month ago – via Twitter paxer89

Panathinaikos Athens announced the addition of former NBA guard Yogi Ferrell for the rest of the 2021-22 season. He will make his overseas debut and play in Europe and EuroLeague for the first time in his career. Ferrell, 28, had begun examining the prospect of playing in Europe earlier in offseason, in case he didn’t find a satisfactory deal with an NBA club. Now, he arrives at six-time EuroLeague champion Panathinaikos to provide a much-needed boost in the point guard position by covering a noticeable gap on the backcourt lineup of the Greek powerhouse.
2 months ago – via EuroHoops.net

Panathinaikos has made a lucrative offer to Yogi Ferrell in hopes that the Greek club can lure him to Europe. As the side of the player has clarified to Eurohoops, Ferrell doesn’t exclude the possibility of signing overseas. However, the deal is not finalized yet and Panathinaikos has to convince the player that moving to Greece is the right choice for his career.
2 months ago – via EuroHoops.net 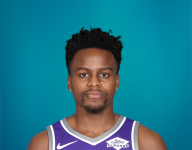 GeorgeZakkas: Panathinaikos BC and Yogi Ferrell are closing in on an agreement, according to @SdnaGr sources. Full story here: bit.ly/3uUP2zY. #paobc
2 months ago – via Twitter ZakkasGeorge