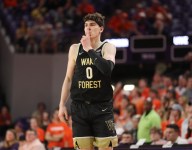 Timberwolves draft Jake LaRavia, trade him to Grizzlies for No. 22 and No. 29 picks

Shams Charania: Sources: Minnesota will pick Jake LaRavia at No. 19 and trade him to Memphis.
4 days ago – via Twitter ShamsCharania

share
tweet
send
sms
email
What did you do last season to improve your game enough to make it to the NBA? Jake LaRavia: It’s just about growing and maturing in the game, as well as off the court. It was about getting my body right, developing my game, and working on stuff that I might not have been as good at. This was a great team we played for this year and I played with a lot of great guys, and Alondes Williams is in the draft class as well. It’s easy to look good when you play with guys like that, but I was also able to showcase some of my abilities. I’m a competitor, so growing up watching March Madness, it sucked not being able to be a part of that. There is always going to be a chip on my shoulder when it comes to basketball, but it is what it is.
6 days ago – via Bryan Kalbrosky @ For The Win

share
tweet
send
sms
email
What is the most underrated part of your game that we haven’t seen as much yet? Jake LaRavia: Honestly, I’d say shooting. My jump shot doesn’t change whether or not a defender is guarding me. It’s like robotics when it comes to my upper-body mechanics. My base will switch depending on if I’m coming off a screen or catch and shoot. But my shooting is muscle memory. I haven’t shown it as much as I probably needed to in college. My first couple of years in college, I rarely shot. I was able to do better at Wake Forest. But I’m a much better shooter than what shows. I’m a very unselfish player, and that’s a good thing, but it can also be a bad thing when a team heavily relies on you. A lot of times, I tried to find the more open player or the “better” shot even if I had a good shot to take for myself.
6 days ago – via Bryan Kalbrosky @ For The Win

share
tweet
send
sms
email
After playing two seasons at Indiana State, LaRavia transferred to Wake Forest and had an efficient all-around season leading to an All-ACC Second Team selection. LaRavia’s versatility as a shooter (56 percent from the field and 38.4 percent from three-point range), rebounding (6.6 boards per game), passing (3.7 assists per game), and defense (1.7 steals and 1.0 blocks per game) have intrigued NBA talent evaluators.
2 weeks ago – via Michael Scotto @ HoopsHype