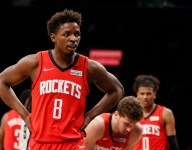 Rockets season preview: All about development

The Houston Rockets today announced they have signed guard Jalen Green, who was the second overall pick in the 2021 NBA Draft. Green is scheduled to play for the Rockets entry in NBA Summer League 2021, which runs from August 8-17 in Las Vegas. Green (6-6, 178), who turned 19 years old on Feb. 9, was the first player to sign with NBA G League Ignite, a team dedicated to the development and mentorship of top young prospects in preparation for the NBA Draft. In 15 G League games last season, he averaged 17.9 points, 4.1 rebounds, 2.8 assists, 1.53 steals, and 2.1 3-pointers made. Green tallied 30 points, 7 assists, 5 boards, and 3 steals in the Ignite’s lone playoff game vs. Raptors 905.
1 year ago – via NBA.com

share
tweet
send
sms
email
David Hardisty: Jalen Green said he sees himself as a franchise cornerstone type of player: “I work hard. I stay in the gym. I trust my work.”
1 year ago – via Twitter clutchfans

share
tweet
send
sms
email
Salman Ali: Rafael Stone on Jalen Green: “Jalens’s electric. His first step is as good as anybody in basketball. His 2nd and 3rd step is even better. When he jumps, it’s really high so good things happen. And on top of that he can handle the ball and shoot. I think Jalen’s a bucket.”
1 year ago – via Twitter SalmanAliNBA

share
tweet
send
sms
email
Adam Spolane: Jalen Green says he first met Kevin Porter Jr when he was in high school. They also spent time together in the G League.
1 year ago – via Twitter AdamSpolane

share
tweet
send
sms
email
Salman Ali: Jalen Green on his relationship with Kevin Porter Jr: “We’re starting to get pretty close. I think he’s super athletic. He has a great game, great IQ. I kind of match that intensity. I think it’ll be a killer back court.”
1 year ago – via Twitter SalmanAliNBA