League sources have confirmed to The Kings Beat that not only did Sacramento interview Shaedon Sharpe at the Combine, but they either sat down with or attended pro-days for a bevy of projected lottery/first round picks, including Keegan Murray, AJ Griffin, Bennedict Mathurin, Dyson Daniels, Tari Eason, Kendall Brown, Ochai Agbaji, Malaki Branham, Jeremy Sochan, Patrick Baldwin, Nikola Jovic, Mark Williams, Christian Braun, Wendell Moore, Teruavion Smith and Trevion Williams.
4 hours ago – via Kings Beat

Storyline: Draft Combine
share
tweet
send
sms
email
Sochan’s origin story is unusual, even for the NBA. Both his parents played basketball at Division II Panhandle State in Oklahoma, but Sochan grew up in England, where his late father, Ryan Williams, played for the Reading Rockets and Bristol Flyers. His mother emigrated from Poland to play at Panhandle, as she was a point guard for SKK Polonia Warszawa in Warsaw. Jeremy started playing as a kid in England. With his mother’s Polish citizenship, he was able to play for the Polish under-16 national team, then became the youngest member of Poland’s senior national team. He then came to the United States himself, playing high school in Indiana at La Lumiere before going to Baylor.
9 hours ago – via David Aldridge @ The Athletic

share
tweet
send
sms
email
“I just say I’m a citizen of the world,” Sochan said. “I have a really unique background. … I’ve really experienced new people, new coaches. I feel like being a citizen of the world is the best way to describe that. Whenever people say, ‘Where are you from?’ it’s kind of a difficult question. I’m like, ‘Good question.’ It takes a lot of minutes to explain this.” Representatives from the Grizzlies, Wizards, Magic, Pistons, Knicks, Bulls, Pelicans, Bucks and Spurs were among the many in attendance Friday. The Spurs and Knicks are among the teams that conducted interviews with him during the week; Sochan gushed about meeting Manu Ginóbili, part of San Antonio’s entourage in Chicago.
9 hours ago – via David Aldridge @ The Athletic

share
tweet
send
sms
email
After a magnificent season with the Baylor Bears, Jeremy Sochan had the decision to go back for his sophomore season or declare for the NBA Draft. The 18-year-old has now made his decision. According to Jonathan Givony of ESPN, Sochan will be declaring for the 2022 draft. He averaged 9.2 points, 6.4 rebounds and 1.8 assists in 25.1 minutes off the bench for Baylor.
1 month ago – via Sam DiGiovanni @ Clutch Points

Storyline: Draft Early Entries
share
tweet
send
sms
email
Jeremy Sochan | 6-9 forward | 18 years old | Baylor Sochan has seen the biggest spike up the board over the last month of the season. He proved himself to be among the most versatile chess pieces in college basketball, capable of handling the ball for stretches and creating offense, as well as playing as Baylor’s anchor at the center position with the Bears’ big depth compromised because Jonathan Tchamwa Tchatchoua missed the latter portion of the year. The idea here is he’s a “positionless” 6-foot-9 wing who can attack bigs off the bounce with some hesitation, a guy who can be the screener or the ballhandler out of ball screens. Over his last eight games of the season, he averaged 12.3 points, seven rebounds, two assists and a steal per game while filling gaps and playing every role. NBA teams are very interested in his versatility, and I’d slot his draft range right now anywhere from around here down to No. 18.
2 months ago – via Sam Vecenie @ The Athletic 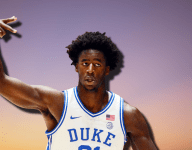 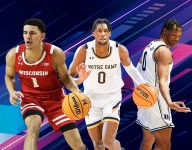