At the presser, Lacob summed up the larger statistical picture: “It’ll take a lot of years of ownership to even come close to what the Celtics have achieved,” he said. “How many times do they have? Seventeen. That’s a lot. How many do we have? (The answer: six as a franchise). We have a ways to go, I guess is the point. “We’ve had pretty good success over the first 12 years. Jerry Buss owned the Lakers for 33 years. Anybody know how many Finals he made in 33 years? Sixteen out of 33 years. Now that is remarkable. Not to take it off the Celtics. But we’ve made now six in 12 years. I love the 50 percent. Whether we can continue that, I don’t know. But we’re going to try.”
1 month ago – via Tim Kawakami @ The Athletic

share
tweet
send
sms
email
Lacob gives an upper hand to Boston in the Celtics-Lakers rivalry, while adding in his own Warriors history too. “I’ll give you a statistic that I think is just the most unbelievable statistic,” Lacob says. “The Celtics are great. Jerry Buss owned the Lakers for 33 years. Does anybody know how many Finals he made in 33 years? Sixteen out of 33 years. Now that is remarkable. We’ve now made six in 12 years. So, I love the 50-percent rate. Whether we’ll continue that, I don’t know. But I’m sure as hell gonna try.”
1 month ago – via Dalton Johnson @ NBC Sports

As he mentioned to Sam Amick of The Athletic, the Lakers revoked West’s season tickets, tickets that he said were promised to him by the late Dr. Jerry Buss. According to West, the Lakers didn’t even bother to tell him of the decision. Nobody around the situation believes this to have been a cost-cutting measure. West himself sees it as retribution. Retribution for what, though?
1 month ago – via Ethan Strauss @ House of Strauss

Storyline: Lakers Front Office
share
tweet
send
sms
email
When the Lakers’ late owner, Dr. Jerry Buss, insisted on adding Payton in the summer of 2003, that meant Jackson had to convince Derek Fisher to come off the bench. And considering those Lakers had won titles in three of the previous four seasons with Fisher starting, this wasn’t a welcome situation for Jackson to have to handle. Yet though they didn’t win it all, the Lakers did manage to return to the finals that season (where they lost to Detroit). The comparison, it seems, was made to make the point that the coach (and his staff) should somehow find a way to find the Westbrook solution. Again, the strong signs continue that the Lakers are preparing for the possibility of Westbrook remaining.
2 months ago – via Sam Amick @ The Athletic 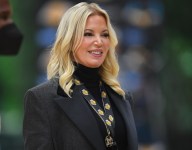 Jeanie Buss on Lakers: 'The team is not for sale'

Will Jeanie Buss ever consider selling the Lakers? What do you think? “In terms of selling the team, I’m not going anywhere. This is exactly what my dad asked me to do,” she said, adding, “The team is not for sale.” She said it’s about far more than an investment, it’s about a journey laid out by Jerry Buss when he handed her the keys. The path had gotten tough, but Jeanie Buss insists — and history has proved — that she can be tougher. “This was something that was important to him, that he wanted me to keep the Lakers in the family,” she said. “I like to say, my dad had his children, but the Lakers were his baby, and he put me in charge of the baby, and I will make sure that the baby thrives.”
2 months ago – via Bill Plaschke @ Los Angeles Times

share
tweet
send
sms
email
Sports valuation expert Bryce Erickson said “locational benefits and market size benefits” could help the Warriors take on the Knicks in revenue. He referenced the HBO series “Winning Time,” which chronicles the Los Angeles Lakers’ rise to prominence in the 1980s on the back of innovation. “Things change,” Erickson said. “Prior to (Jerry Buss) buying the team, what were the Lakers? They were a struggling franchise in a struggling league. And their timing was impeccable. So, whose to say that more than 40 years later, the Warriors can’t have the same effect? There’s nothing there to say they couldn’t, particularly from an economic vantage point.”
2 months ago – via Jabari Young @ CNBC