Kevin Love No. 176 in points now Moved ahead of Manu Ginobili and David West with 14,047 points. He’s now 6 away from Dave DeBusschere and Jerry Lucas
3 months ago – via HoopsHype

share
tweet
send
sms
email
Jerry Lucas played in his first basketball game when he was in the fourth grade. In Middletown, Ohio, his grade school only had a sixth-grade team, so Lucas played up. But he didn’t play much, mostly just practicing with the team. Finally, he got on the floor for the final 15 seconds of the last game of the season. “I loved it,” Lucas told The Athletic. “I was excited about it. And I wanted to be the best player I could be.” So after the season concluded, Lucas developed his method of shooting, based on the acronym D.A.D., which stood for “direction, arc and distance.” He tried to take around 5,000 shots a day. For Lucas, each shot had a purpose, working through the three elements he envisioned. He would practice for hours, getting kicked off public basketball courts in a Middletown park by older people wanting to play.
7 months ago – via Kelsey Russo @ The Athletic 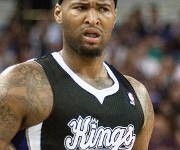 The Top 50 players in Kings history