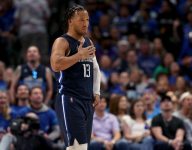 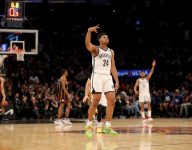 NBA Twitter reacts to the Knicks blowing a 28-point lead vs. Brooklyn

“I said to myself, you’re here. Let’s make the best of it. Give it all you got. Don’t leave nothing in the tank. And then you can sleep at night,” Hardaway said. “That’s what I did. It does f–k with you mentally because it’s just — the Garden, the mystique of the Garden. You got Spike Lee on the sideline, you got all these stars, and they want to win so badly, and we weren’t winning. And I was a part of that negative tradition of the Knicks haven’t won in a while. And that bothered me too, because I felt like those fans out of all the fans in the NBA deserve to win. They’re loyal.”
2 years ago – via Stefan Bondy @ New York Daily News 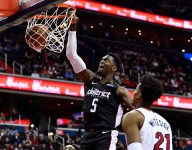 Steve Kerr had just started his job as a first-time general manager of the Phoenix Suns when he told a colleague, “I’m very happy. This job is great.” Seven months later, Kerr confided to the same GM: “This is the damndest job in the world. All you do is sit around and discuss all these trade scenarios and 99 percent of the time, they never happen. You spend all this time talking about stuff that never happens.”
8 years ago – via New York Daily News

share
tweet
send
sms
email
The fact that Anthony fouled Randolph on the play only made him hungrier to redeem himself. And so the final play ensued … “It was supposed to be a pick-and-roll, and Toney brought it up and kicked it to me, then me and Amare were in a pick-and-roll but they overplayed it and denied Amare,” Anthony said. “I got open, got away from Tony a little bit. He had been guarding me close-up the whole night, so I just wanted to get a little bit of space where I could see the basket. So I made a move, a jab move, got a little bit of space, just pulled up and shot it in.” Did he know it was good? “When it left my hand, yeah, yeah. It was just one of those shots that you know was going to go in,” Anthony said. “That particular one felt really good.”
11 years ago – via ESPN.com