Manny Pacquiao: Nice to have @Klay Thompson at Wild Card Gym today! I told Klay I would teach him how to fight if he’ll teach me how to shoot.

Nice to have @KlayThompson at Wild Card Gym today! I told Klay I would teach him how to fight if he’ll teach me how to shoot. 🥊🏀 pic.twitter.com/1E9YM4BWcc

Had the opportunity to meet the legend work @MannyPacquiao 🇵🇭 pic.twitter.com/DK5weDjPUN

The stars continue to come out to Wild Card Gym to take a peek at Sen. Manny Pacquiao as he prepares for his upcoming bout with Errol Spence Jr. On Saturday (Sunday, Manila time), Pacquiao had a star-studded group of Fil-Am guests headlined by Utah Jazz guard Jordan Clarkson. Clarkson was joined by music artists Apl.de.Ap and J. Rey Soul — both of whom have Filipino lineage — of the Black Eyed Peas.
2 months ago – via Luisa Morales @ philstar.com

share
tweet
send
sms
email
Kawhi Leonard, who led the Toronto Raptors to the title last June before signing with the Los Angeles Clippers, is in attendance at ringside for the Manny Pacquiao-Keith Thurman bout on Saturday (Sunday morning PHL time).

NBA Finals MVP Kawhi Leonard sits next to the Pacquiao family at #PacThurman. | via @mavgonzales pic.twitter.com/Mhy34Ocm6j

2 years ago – via GMANetwork.com

share
tweet
send
sms
email
Manny Pacquiao says he wants to fight until he’s 45 years old … and when he retires, the boxing star tells TMZ Sports he will seriously consider buying an NBA franchise. The 40-year-old superstar has made a FORTUNE during his boxing career — and says he feels he’s got AT LEAST another 5 years of fighting before hangin’ ’em up for good. “I feel like young, like late 20s,” PacMan says … explaining that he still loves the sport and all of the training that comes with it.
2 years ago – via TMZ.com 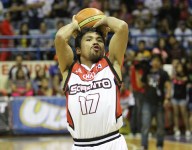 Manny Pacquiao scores his first basket in the Filipino League

Filipino boxing great Manny Pacquiao will travel to Japan next month to lend a hand as the Philippines bids against China to host the 2019 basketball World Cup. Manuel V. Pangilinan, the president of the Basketball Federation of the Philippines, said Friday that Pacquiao will be among Filipino government officials and business executives who will try to persuade FIBA to award the hosting of the tournament to the Philippines.
6 years ago – via USA Today Sports