Adrian Wojnarowski: Nuggets F Michael Porter Jr., will undergo a surgical procedure on his lower back and miss an indefinite period, his agent Mark Bartelstein of @Priority Sports tells ESPN. Bartelstein says Porter’s expected to make a full recovery; timetable on return will come after surgery.
1 week ago – via Twitter wojespn 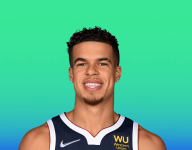 With Beal’s decision on a contract extension looming, Washington and its General Manager Tommy Sheppard have made their pitch. On Friday, nearly two years after Beal signed a two-year, $72 million deal, the Wizards can officially present a four-year, $181.5 million extension. Sheppard said in an interview earlier this month the team plans to do so “at dawn.” Beal, however, will take slightly more time to figure out his future. “My biggest thing is getting us off going to a good start,” Beal said Monday, after noting the deal is for Sheppard, team owner Ted Leonsis and his agent Mark Bartelstein to figure out. “We worry about the contract money and all that later. I’ll let them deal with it when the time comes, for sure. I got all year to sign, too. So I’m not in a rush.”
2 months ago – via Ava Wallace @ Washington Post

Adrian Wojnarowski: Denver Nuggets forward Michael Porter Jr., has agreed on a five-year designated max extension that could be worth up to $207 million, his agent Mark Bartelstein of @PrioritySports tells ESPN.
2 months ago – via Twitter wojespn

This rumor is part of a storyline: 6 more rumors
share
tweet
send
sms
email
Adrian Wojnarowski: Porter Jr., deal is worth $172M unless he reaches the designated max criteria and makes one of the three All-NBA teams this season.
2 months ago – via Twitter wojespn