Jason Anderson: The Kings are listing Maurice Harkless (knee) as questionable for tonight’s game against the Clippers. Marvin Bagley III (illness), Harrison Barnes (foot) and Robert Woodard II (ankle) are out.
6 months ago – via Twitter JandersonSacBee

Jason Anderson: The Memphis Grizzlies have officially ruled out Ja Morant (left knee sprain) for Sunday’s game against the Sacramento Kings. Maurice Harkless (knee) is questionable, Harrison Barnes (foot) is doubtful and Richaun Holmes (illness) is out for for the Kings.
6 months ago – via Twitter JandersonSacBee 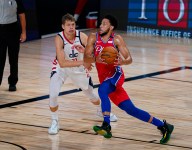 As far as replenishing the lost depth, James is a powerful recruiter. The Lakers could revisit DeMarcus Cousins, former James teammates like Tristan Thompson (also a Klutch client) and Kyle Korver and/or a versatile defender like Maurice Harkless.
2 years ago – via Eric Pincus @ Bleacher Report

“I would wait until it was all over, but I think that just the fact that I would be there [in Orlando] already, knowing that as soon as this is over I can go home it would make it a lot easier,” said Maurice Harkless, speaking before it was known that his Knicks would not be among the teams invited to Orlando, where he has relatives. Harkless did not go back to see his family after the season was suspended, because he’d played against two teams, the Detroit Pistons and Utah Jazz, who had players test positive for COVID-19. “My grandma is really old,” Harkless said. “I didn’t want to risk it not knowing, so I came here [to L.A.].”
2 years ago – via Tania Ganguli @ Los Angeles Times

New Knicks president Leon Rose wanted to examine the 26-year-old closely across the last 16 games as he enters free agency. That audition likely will get cut short with the season’s indefinite suspension because of the coronavirus pandemic. “It was a chance for him to showcase to the Knicks and to see if he wanted to be here,’’ one NBA source told The Post. “He always wanted to be a Knick.’’
2 years ago – via Marc Berman @ New York Post