Murray struggled from the field, going just 2 for 11. “Jamal’s still a work in progress,” Nuggets coach Michael Malone said, acknowledging that the turnovers, ultimately, were Denver’s undoing. Aaron Gordon led the Nuggets with 27, and Nikola Jokic added 19 points, eight rebounds and eight assists. After getting benched last game, Bones Hyland was tremendous with 20 points and five assists. Despite his production, Hyland said the defensive mistakes have yielded losses that they should’ve won. “The locker room’s definitely frustrated,” Hyland said. Luka Doncic had 22 points and four 3-pointers as part of Dallas’ barrage. Now 14-10, the Nuggets will re-group and head to Portland on Thursday.
22 hours ago – via Mike Singer @ Denver Post 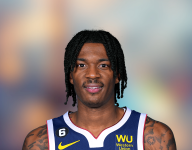 Vinny Benedetto: Michael Malone did not commit to Bones Hyland playing tonight. Hyland told us after shootaround, he expects to play tonight.
1 week ago – via Twitter VBenedetto

share
tweet
send
sms
email
DNVR Nuggets: Q: is Jamal Murray all the way back? Michael Malone: I think he’s still got another level…I still don’t think he’s in optimal game shape. I think that’s going to come and when he gets there that will allow him to impact the game on so many levels.
1 week ago – via Twitter 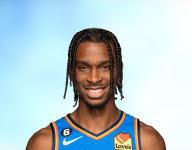 Joe Mussatto: “The guy is an MVP candidate,” Michael Malone says of Shai Gilgeous-Alexander.
2 weeks ago – via Twitter joe_mussatto

share
tweet
send
sms
email
Katy Winge: Asked Coach Malone what part of Shai Gilgeous-Alexander’s game is most challenging and he said “when he’s on the floor.” “I don’t think the kid has any weaknesses in terms of offensive game and the arsenal he has.” Leads the NBA in drives per game. OKC leads the NBA in PITP.
2 weeks ago – via Twitter katywinge