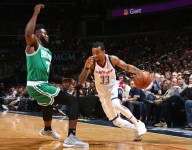 Trey Burke, Jarrett Jack rumored to sign with the Knicks 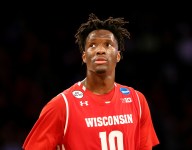 Ian Begley: Here is the Knicks’ full Summer League roster, per the team:

Here is the Knicks' full Summer League roster, per the team: pic.twitter.com/Rd9TlI5MsG

share
tweet
send
sms
email
Jordan Strack: Nigel Hayes will be playing with the New York Knicks in the NBA Summer League according to his mom.
6 years ago – via Twitter

share
tweet
send
sms
email
Ian Begley: The Knicks have a workout scheduled with Wisconsin’s Nigel Hayes this coming week, league sources told ESPN. The Knicks have two second-rounders (44 and 58) and have worked out several potential second rounders like Hayes recently. Hayes measured at 6-8 at the NBA Draft Combine with a 7-3 wingspan and some college observers see him as having the potential to be a versatile defender at the next level with a strong outside shot – something the Knicks certainly could use…. In addition to working out for the Knicks, UNC’s Kennedy Meeks also worked out for the Brooklyn Nets last week and some people familiar with the workout said the big man excelled in the workout. Meeks is projected by some as a late second-round pick.
6 years ago – via ESPN