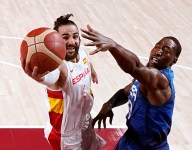 The best scoring performances ever against Team USA

As he further explained, he enjoys “being a star” in Tokyo. “It is a very special day for Slovenia,” said Doncic about the nation’s Olympic debut as adapted by Marca, a game in which he was only seven points away from tying the scoring record in the Olympics held by Oscar Schmidt (55 points). Despite this huge feat, Doncic takes it day by day. “I don’t care about the records, we wanted a victory and that’s what we came for”. “I like being a star of the Games; I feel good to be one of the stars if I am”, said Doncic, who also joked about the photos taken in the Olympic Village. “I’m taking a lot of photos, yes, there could be more, although the one with the most photos is Djokovic”.
2 months ago – via EuroHoops.net 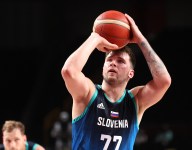 For little Kobe Bryant growing up in Italy, the player that amazed him as a child was a skinny and half bald Brazilian guard who often beat his father’s teams with long distance shots. Oscar Schmidt, one of basketball’s all-time leading scorers with almost 50,000 points, played with Italian teams between 1982 and 1993. It was there that the son of Joe Bryant started going to courts to watch his father in action and, when possible, take a few shots himself.
2 years ago – via Mauricio Savarese @ Washington Post