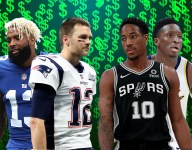 In addition to the Larry O’Brien Trophy and the championship rings they will receive before their first home game next season, the Spurs’ fifth title comes with a hefty payday. Because the Spurs had both the best record in the Western Conference and the NBA, they will have the largest playoff payout in league history: $4,104,811 to split among players and support staff. Here’s how their playoff pool was derived: $403,790 for having the best record in the NBA; $353,316 for best record in the Western Conference; $208,940 for making the first round of the playoffs; $248,611 for the second round; $410,827 for the third round (Western Conference finals); and $2,479,327 for winning the Finals.
8 years ago – via San Antonio Express-News