Similarly, despite his less-than-textbook shooting form — elbows flared out with the ball overhead — Drexler also was one of the first modern players to embrace the 3-pointer. Certainly, he was the first elite player to do so; the others profiled more as shooting specialists. He launched 4.4 triples per game in 1991-92, a borderline obscene total at the time. (Jordan took just 1.3, for example, and even Reggie Miller took just 4.2.) Despite his aerial artistry, Drexler never won a dunk contest, partly because his jams were more graceful, Bob Beamon-esque broad jumps through the air than explosive throw-downs, and partly because his entries were inevitably judged against Jordan’s (or Dominique Wilkins’) in ways that, say Spud Webb’s, were not. For instance, Drexler’s best dunk contest effort was perhaps this inside-spin 360 that he dropped over the rim in 1988, hugely underrated in difficulty but not one to make the crowd gasp.
5 months ago – via John Hollinger @ The Athletic

share
tweet
send
sms
email
4th through 12th graders from reservations around the state gathered on the basketball court this week in New Town to sharpen their skills and get a little encouragement from a former NBA icon. “They think we just show up in shorts and play man but it takes a lot of hard work and so I try to install them that you have to go out and practice,” says former NBA Player Spud Webb. “Once the game starts everything you practiced comes out in the game.”
10 months ago – via David Gibson @ KX News

share
tweet
send
sms
email
Webb knows all about hard work overcoming the odds as the third shortest athlete to ever play in the NBA and going on to compete for 13 years at the professional level. “Ah he is too short, too fat and things like that and if you practice It dont matter,” explains Webb. “So always remember to just work on your game so you can get better.” Webb’s goal is to motivate the next generation, and his impact is already being felt in North Dakota
10 months ago – via David Gibson @ KX News 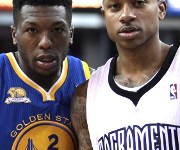 The shortest players in NBA history

Former NBA great Spud Webb is pulling out of stripper basketball — and, oddly, his rep says the whole head coaching gig was merely an “ill-fated attempt at humor.” In a statement, Spud’s rep says … “Contrary to reports, Spud Webb will not be coaching the Rick’s Cabaret/New York Stripper Basketball Team.” The rep adds the announcement was taken out of context.
10 years ago – via TMZ.com