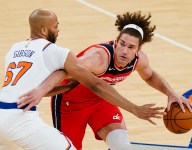 The slowest players in the league, according to NBA 2K22

Adam Himmelsbach: Per source, Tacko Fall’s deal is still an Exhibit 10 contract, just as he originally agreed to shortly after the draft.
3 years ago – via Twitter AdamHimmelsbach

share
tweet
send
sms
email
Ben Rohrbach: Asked a Celtics staffer if Tacko Fall is an NBA player. The response: “I think he’s worth an investment for sure. If he improves this season anywhere close to his improvement the last few months then I think it’s hard to argue against him.” He’s been in Boston working all week.
3 years ago – via Twitter brohrbach

share
tweet
send
sms
email
Mike Vorkunov: Knicks HC David Fizdale will be one of the coaches going to the NBA/FIBA’s Basketball Without Borders camp in Senegal later this month. Doc Rivers, Kenny Atkinson, Elton Brand, Joel Embiid, Ed Davis, Tacko Fall, and a slew of other coaches and players will work the event.
3 years ago – via Twitter MikeVorkunov

share
tweet
send
sms
email
Chris Forsberg: Danny Ainge on @Toucherandrich on Tacko Fall: “We’re trying to still get a contract done with Tacko. We haven’t signed him yet. I really can’t say much more about Tacko than we’re just trying to get him in the fold. … Hopefully we can get that done but we’ll see.”
3 years ago – via Twitter ChrisForsberg_

share
tweet
send
sms
email
Boston recently signed Fall to an Exhibit 10 contract, which essentially means he would receive a $50,000 bonus if he agrees to join the Celtics’ G-League affiliate, the Maine Red Claws, if he is waived after training camp. But since summer league, fans have been clamoring for Fall to be added to the Celtics’ 15-man roster, and when Guerschon Yabusele was waived last week, there was suddenly an open spot. On Wednesday, president of basketball operations Danny Ainge was asked about Fall’s standing. “We want to take his development very, very seriously,” Ainge said. “He’s a high priority for us to try to really develop into a player.”
3 years ago – via Boston Globe