How would you compare your initial expectations of your role and the team’s success to what has actually happened to start the season? Lauri Markkanen: I had high expectations, especially after this summer. I got my confidence going with the national team. There were a lot of NBA guys [in EuroBasket]. Physically, I’m in the best shape of my life. So, I had high expectations from the beginning. We have a lot of good players on this team. So, I had high expectations with the team even coming into the year, especially after training camp started. We have a good team. We just have to stay on the same page and build off our chemistry. We have a lot of new guys. But that was the same thing last season when I was in Cleveland. Everyone was doubting you at the beginning of the year. Then we started out well. Having that experience and then going into training camp, I knew we had a good team. We just have to keep going and keep getting better with knowing each other and staying on the same page.
1 month ago – via Mark Medina @ NBA.com 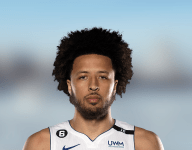 Adrian Wojnarowski: ESPN Sources: Detroit Pistons guard Cade Cunningham – the No. 1 overall pick in the 2021 NBA Draft – plans to have season-ending surgery on his left shin. Cunningham is expected to make a full recovery ahead of training camp in 2023-2024. pic.twitter.com/0OyUkDOtK7
2 months ago – via Twitter wojespn

share
tweet
send
sms
email
Cunningham, who’s been sidelined since November 9, consulted with multiple doctors in recent weeks and ultimately decided with the Pistons and his representatives at Excel Sports to undergo a procedure that’s expected to have him fully recovered ahead of training camp in 2023-2024, sources said. Cunningham took a month to see if rest and rehabilitation would allow for the shin to improve but made the decision on Monday to move forward with the season-ending procedure.
2 months ago – via Adrian Wojnarowski @ ESPN

share
tweet
send
sms
email
Malik Beasley: The expectation with us going into the season was we were all underdogs. Collin Sexton, Lauri Markkanen, and Jarred Vanderbilt. Me and Jarred came from playoff teams. I’m not saying we were the main factors, but we did play a nice part in changing Denver into a playoff team and then Minnesota. When we came in, we heard what was expected out of us to be a tanking team, but a lot of the guys in the locker room during training camp said, “Let’s be great.” We have a nice team. If we put it together the right way, we could be really good. To start off, none of us had egos. We all wanted to prove that we’re a special team.
2 months ago – via Michael Scotto @ HoopsHype

share
tweet
send
sms
email
Well I’m not even necessarily going down memory lane too much. But more so it’s this: Was Cleveland on your radar at all at any point before the deal went down? Donovan Mitchell: Anything you heard in the news is what I heard. Like, when I said that I heard Cleveland was in there for a second and took their name out, that’s what I thought. So I didn’t think about it. It wasn’t one that was on my radar. I just said, “Look, I’m just gonna play wherever I’m at.” If it came back to training camp in Utah, I’d be ready for that. I took the summer to say, “Look, I played like s— in the playoffs. I wasn’t my best self, and I want to be the best me I could be for wherever the hell I’m at. Wherever the hell I’m at — New York, Brooklyn, Miami, Toronto, OKC, Utah.”
3 months ago – via Sam Amick @ The Athletic

Sources informed The Republic the Suns went into training camp looking to start Johnson ahead of Jae Crowder, who later decided not to attend training camp. The Suns have been trying to trade the veteran forward who started all 80 games he saw action in last season counting the playoffs. Crowder played a key role in Phoenix reaching the 2021 finals his first season with the Suns and having the NBA’s best record last season. Chris Haynes reported during last week’s Suns-Warriors game on TNT in Phoenix that Crowder told him this isn’t about him starting or not.
3 months ago – via Duane Rankin @ Arizona Republic