ESPN Stats: Entering Thursday, Russell Westbrook leads the NBA with 406 rebounds and 403 assists since All-Star Break. According to @EliasSports the only player to lead the NBA in both rebounds and assists after the All-Star Break is Wilt Chamberlain in 1967-68.
4 days ago – via Twitter

The 21 rebounds are a career-high for Westbrook. The 24 assists tied his career-high. Only twice before has a player gone for 20-plus rebounds and 20-plus dimes in an NBA game. Some tall fellow named Wilt Chamberlain did it on Feb. 2, 1968. The other person to do it? Westbrook, of course, two years ago, when he went for 20-20-20 for the most Westbrookian reason possible: Just because he wanted to, getting there in honor of the late Nipsey Hussle, who was a member of the Rollin’ 60s. As Westbrook put it after that game, “20, plus 20, plus 20.” Monday’s performance was the first time any player in the 74-year existence of the NBA has gone for 21 boards and 24 assists. Westbrook’s teammate, Rui Hachimura, marveled succinctly. “Twenty rebounds,” he gaped before pausing for a moment. “It’s not normal, you know?”
7 days ago – via Fred Katz @ The Athletic

Russell Westbrook became the only player with multiple 20-assist, 20-rebound games in NBA history — Wilt Chamberlain is the only other player with one — and the surging Washington Wizards moved closer to Indiana in the Eastern Conference playoff standings by beating the Pacers 154-141 on Monday night. Westbrook had 14 points to go along with his career-high 21 rebounds and career-high-tying 24 assists for his league-leading 32nd triple-double of the season. He has 178 triple-doubles, three short of Oscar Robertson’s career record, with seven games remaining this season for Washington.
7 days ago – via ESPN News Services @ ESPN 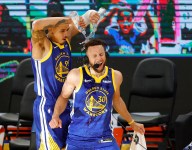 share
tweet
send
sms
email
StatMuse: Clint Capela is having a historical season. 15.7 PPG 14.7 RPG (leads NBA) 60.4 FG% Only one other player has averaged 14/14 on 60% shooting in a season in NBA history — Wilt Chamberlain. pic.twitter.com/h9jfsnslpg
3 weeks ago – via Twitter statmuse

StatMuse: Joel Embiid is averaging 33.4 points and 12.4 rebounds per 36 minutes. Only two players have averaged more in a season in NBA history — Giannis last year and Wilt Chamberlain. pic.twitter.com/0IJd4FWGdL
4 weeks ago – via Twitter statmuse