Brad Townsend: Carlisle on 105.3 The Fan laid out new responsibilities on his staff after Stephen Silas’ move to Houston as HC. Jamahl Mosley will be the lead assistant, Mike Weinar steps into Silas’ role as offensive coordinator and new hire Zach Guthrie will be defense and special situations.
2 months ago – via Twitter townbrad

share
tweet
send
sms
email
Zach Guthrie has been elevated to assistant coach/basketball strategy after joining the staff as manager of basketball strategy/technology prior to the 2015-16 season. Guthrie arrived to Utah after spending three years with the Orlando Magic as their manager of advanced scouting. Prior to that, he spent two seasons with the San Antonio Spurs, ascending to the role of assistant video coordinator.
4 years ago – via NBA.com 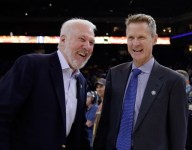 The Utah Jazz announced today that the team has hired Jeff Watkinson as assistant coach/integrated player development and Zach Guthrie as manager of basketball strategy/technology. Per team policy, terms of the agreements were not announced. For the past three seasons, Watkinson served as the strength and conditioning coach for the Atlanta Hawks (2012-15), who won a franchise-record 60 games in 2014-15 en route to the best record in the Eastern Conference. He rejoins Jazz Head Coach Quin Snyder after working with him in Atlanta (2013-14) and also at the University of Missouri (2001-06). Before working for the Hawks, Watkinson owned and operated Wat Training, where he worked with NBA players, including Pelicans guard Eric Gordon, to improve their strength, conditioning and basketball development skills. Prior to the NBA, Watkinson served as the head strength and conditioning coach at Indiana University from 2006-10, after holding similar positions at Missouri, Clemson, Charlotte and College of Charleston.
6 years ago – via NBA.com