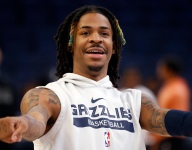 NBA League Pass: The most live games plus NBA TV

Get a free trial

Teammates couldn’t help but acknowledge Cambage’s discontent, and in return out of annoyance, they began force-feeding her the ball regardless of what play was supposed to be run, sources say. After the Sparks’ 84-66 embarrassing blowout loss, Cambage rushed to the locker room to get dressed for an early exit out of the arena after finishing with 11 points and five boards in 22 minutes. Prior to departing the locker room, she had a message for her teammates: “I can’t do this anymore. Best of luck to you guys,” she stated before storming out, according to sources with knowledge of her departure. Her teammates were shocked at the timing, sources say, but not of the end result.
6 months ago – via Chris Haynes @ Yahoo! Sports

share
tweet
send
sms
email
In film sessions, sources say it was customary for Cambage to call out teammates, accusing them of looking her off and not targeting her. Teammates would counter that she’s not sealing in the post and seldom gets back on defense when a turnover occurs. It was a conundrum that went unresolved. One ongoing team grievance is the club’s practice location. The Sparks practice at Jump Beyond Sports complex the majority of the season, and it’s been described as the worst practice facility in the league, sources say. Fisher and staff picked this location prior to the season to the dismay of most of the players, sources say. “An AAU team wouldn’t want to play there,” one player said.
6 months ago – via Chris Haynes @ Yahoo! Sports

share
tweet
send
sms
email
Cambage was posting her lowest stats since her rookie season, averaging 13 points and 6.4 rebounds. She wasn’t voted to the All-Star game in Chicago. Cambage was spotted in Las Vegas in the height of NBA Summer League and later tested positive for COVID-19. She missed two games before returning to play on July 21 against Atlanta and Saturday against the Aces. Those would be her last games for the Sparks. Where does Cambage go from here? There are currently no interested WNBA teams, sources say. Some believe Cambage will use the down time to focus on her modeling career and deejaying, skills that are said to be admirable.
6 months ago – via Chris Haynes @ Yahoo! Sports

share
tweet
send
sms
email
Liz Cambage’s time with the Los Angeles Sparks is over. The team announced Tuesday they’ve agreed to a “contract divorce” with the 30-year-old center, just 25 games into her Sparks tenure. “It is with support that we share Liz Cambage’s decision to terminate her contract with the organization,” Sparks managing partner Eric Holoman said. “We want what’s best for Liz and have agreed to part ways amicably. The Sparks remain excited about our core group and are focused on our run towards a 2022 playoff berth.”
6 months ago – via Tyler Greenawalt @ Yahoo! Sports

share
tweet
send
sms
email
Three days after Crypto.com and AEG announced a blockbuster naming rights deal for Staples Center to become Crypto.com Arena, the cryptocurrency platform will talk with officials from the Los Angeles Sparks on Friday to discuss a separate partnership deal after the WNBA franchise was left out of negotiations, sources told The Morning Column.
1 year ago – via Arash Markazi @ Arash Markazi on Substack

share
tweet
send
sms
email
Crypto.com officials told the team that the Sparks were never mentioned during negotiations with AEG. The Lakers and Kings were highlighted, the Clippers’ imminent departure was referenced and Staples Center, L.A. Live, Microsoft Theater and The Novo were obviously discussed, but the Sparks were never presented as an option or possible part of the deal to Crypto.com, according to sources.
1 year ago – via Arash Markazi @ Arash Markazi on Substack

After an extended period of undefined leadership at the helm of the Los Angeles Sparks, head coach Derek Fisher has added the general manager job to his title, The Next has learned, as part of a front office revamping that sets clear lines of authority in basketball operations for the first time since Penny Toler was fired in October of 2019. “We’ve really worked extremely hard to try and establish a culture for how we want to try and do things in terms of running basketball operations, and how we want to try to build a more cohesive organizational structure between basketball and business,” Fisher told The Next. “And we’re nowhere near done. This is just the beginning.”
2 years ago – via Jackie MacMullan @ ESPN