Brandon Rahbar: Shai Gilgeous-Alexander scores 30+ points for the 7th straight game. That ties Kevin Durant for the 4th longest streak in OKC history. SGA now has 17 30+ point games this season. That’s #1 in the NBA.
2 days ago – via Twitter BrandonRahbar

The Thunder, behind another fourth-quarter surge, beat the Hawks 121-114.  “It was a good gut check tonight,” Shai Gilgeous-Alexander said.  The Thunder (11-13), steps slow and fractions off in the first half, trailed by four points heading into the fourth quarter, just as it did against the Timberwolves.  The start of the fourth quarter was deja vu, with a non-SGA unit not only staying afloat, but taking a lead by the time Gilgeous-Alexander reentered midway through the fourth quarter.  OKC had turned a four-point deficit into a three-point lead by the time its star checked back in.  Josh Giddey, who had 17 points, drained a deep 3-pointer to beat the shot clock to give the Thunder a 96-92 lead with 6:30 to play.  “Felt good,” Giddey said.  “I knew it was going in,” SGA added.
2 days ago – via The Oklahoman 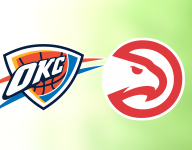 Oklahoma City: Kenrich Williams (right knee sprain) has been downgraded to out for Monday’s game against Atlanta.
3 days ago – via Alberto De Roa @ HoopsHype

Kevin Chouinard: For tomorrow’s game vs. Oklahoma City: John Collins (left ankle sprain) is out. Trent Forrest (concussion protocol) is out. Justin Holiday (health and safety protocols) is out. De’Andre Hunter (right hip flexor strain) is out.
4 days ago – via Twitter KLChouinard