Bleacher Report: “People that I’ve had relationships with throughout USA basketball for that long, threw me under the bus.” @kevinlove reflects on Jerry Colangelo and withdrawing from Team USA

“People that I’ve had relationships with throughout USA basketball for that long, threw me under the bus.” ⁰⁰@kevinlove reflects on Jerry Colangelo and withdrawing from Team USA 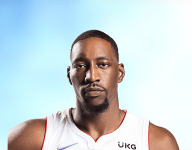 Bam Adebayo to Gregg Popovich: 'I'll never forget that you cut me'

Adebayo was cut from Team USA by Popovich before the team finished seventh in the 2019 World Cup. However, he was named to the 2020 Olympic squad that won gold in Tokyo. Adebayo was asked if he had any resentment or animosity for Popovich, who was still serving as Team USA’s coach when he won his first Olympic gold medal. “Definitely animosity, because I felt like I should have been on that team,” Adebayo said. “But when we got to the Olympics I had to let my animosity go because he was my coach at the time. “But when we left, I let him know from the time being in this Olympics we cool and you my coach, I’m your player … but when we leave, just know, I’ll never forget that you cut me.”
3 months ago – via Joseph Salvador @ Sports Illustrated

share
tweet
send
sms
email
The 24-year-old big man said Popovich understood where he was coming from. He also said to this day he uses Popovich cutting him as motivation every time the Heat play the Spurs. “Whenever we play the Spurs, he will never forget that he cut me,” Adebayo said.
3 months ago – via Joseph Salvador @ Sports Illustrated

Hill, 49, is worth an estimated $250 million, according to Celebrity Net Worth, a website that tracks such things. He earned $143 million in salary as a player and secured numerous lucrative endorsement deals (you’ll see one this month with Hill as the pitchman for Philips Norelco’s newest razor blade). He was part of Tony Ressler’s ownership group that paid $850 million to own the Hawks. So Hill’s work for Team USA is pro bono (Colangelo didn’t get paid, either). But, as Hill says, the job “is not ceremonial. There’s certainly quite an incredible amount of work.”
3 months ago – via Joe Vardon @ The Athletic

share
tweet
send
sms
email
For the next three weeks, though, Hill’s primary job is to sit next to Jim Nantz and Bill Raftery for March Madness. It’s how Hill has spent his Marches and Aprils since he was first hired for the job in 2015. Hill’s first broadcast with Nantz, Raftery (onions!), and sideline reporter Tracy Wolfson for the 2022 NCAA Tournament is at 12:40 p.m. Friday, when No. 15 Jacksonville State takes on No. 2 Auburn in Greenville, S.C., on truTV. “He’s egoless, he is a student, no job is too big or too small,” said Craig Barry, executive vice president at Turner Sports. “He gives it the same effort. Whenever he’s involved. So, you know, for me, he was the first pick in the booth. And, you know, I couldn’t think of anybody better.”
3 months ago – via Joe Vardon @ The Athletic